Due to the COVID pandemic, the majority of people will likely be watching the game from home. Others plan to be in Kansas City, rooting on the Bills.

BUFFALO, N.Y. — We’re now less than 24 hours away from the AFC championship game, one that many fans say they’ve been waiting on for two decades.

Due to the COVID-19 pandemic, the majority of people will likely be watching from home. But others plan to be right there in Kansas City, rooting on the Bills.

Greg Metzen and Jeff Shepard sang, “Oooh, I’ve got a feeling, Buffalo’s going to the Super Bowl,” during an interview with 2 On Your Side before their flight departed from the Buffalo Niagara International Airport.

We also caught up with Nate and Cheryl Schutt on their way into the airport. Cheryl said, “We’re really excited. All week we’ve been ready. We’ve been pumped, so it’s gonna be fun.”

Not all Bills fans heading to Kansas City could get tickets, but of those who did, some told us they got lucky with snagging tickets after last week’s win. Others said they had been optimistically planning ahead. 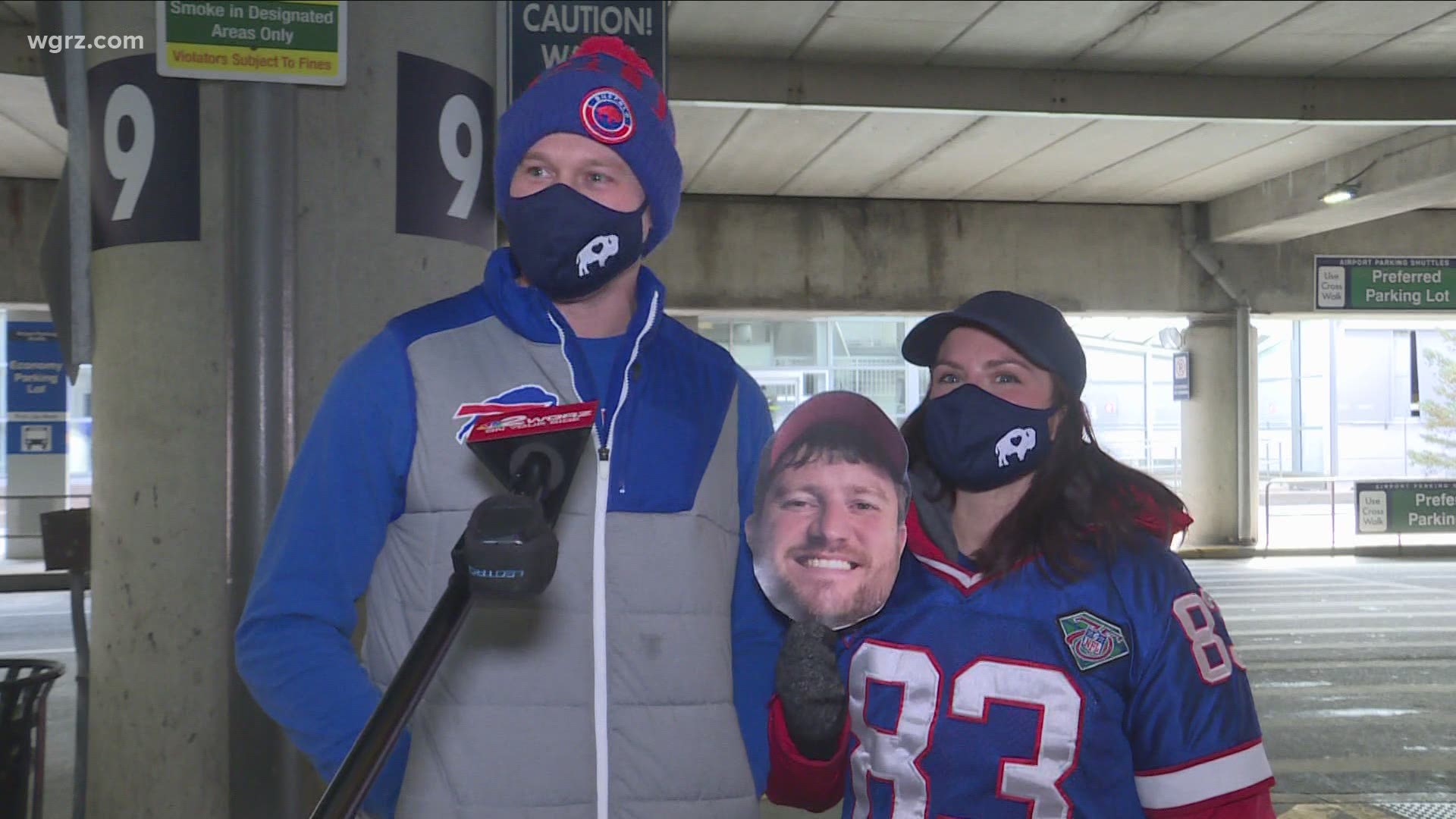 Paul Hinderliter explained, “As soon as the Bills made the playoffs, we weighed our options. We looked at Kansas City, they were the number one seed. We bought the championship Sunday tickets hoping the Bills would make it.”

Even with the additional fan traffic at the airport, a spokesperson with the NFTA said volume is still relatively low.

“When you think about COVID, we’ve seen a very different airport. Yes, we’ve seen pockets of people, but not the crowds we would typically see playoff time and certainly, of course, Super Bowl time,” said Helen Tederous, the NFTA Director of Public Affairs.

Despite the 14-plus-hour ride, AAA spokesperson Elizabeth Carey told 2 On Your Side that they believe many people decided to drive instead.

However, she said they also fielded questions from fans weighing their options on if the trip would be worth it.

Carey explained, “A lot of times in the past, even if people didn’t have tickets to a game, they’d head out there just for the fan appeal, the excitement and all the parties that go with it. But all of that’s probably gonna be limited due to COVID.

“It won’t be the experience that we would’ve seen in the past, so people should take that into consideration if they don’t have tickets and really consider what’s best for them if they do want to travel, or if they just want to stay home and watch the game on TV in Buffalo.”

Wherever you’re watching, the fans we spoke to believe it will be a game to remember.

“This is it. I’ve been waiting my whole life for this. I’m going to cry like a little baby when we actually do it. This is the year,” Norris Poleon said.

Metzen added, “I had season tickets through the four Super Bowls. I went to the Pasadena one. Not good in those days, but I think we’re a whole different team now.”

Nate Schutt said, “Go Bills. We’re so pumped. Can’t wait to see these guys in person. We’ve seen them on TV all year but hardly anyone’s seen them in person. So we’re just super excited and pumped about what the team is doing.”

As for Sunday night, Tederous told 2 On Your side the NFTA is discouraging fans from gathering at the airport to welcome the Bills back to Buffalo.

The Buffalo Bills echoed that in a tweet, saying in part, “Due to COVID-19, we are asking fans to NOT gather at the airport.”

We’re going LIVE tomorrow to send the squad off to Kansas City!

Due to COVID-19, we are asking fans to NOT gather at the airport.

The Ultimate Guide to Yoho National Park in Canada