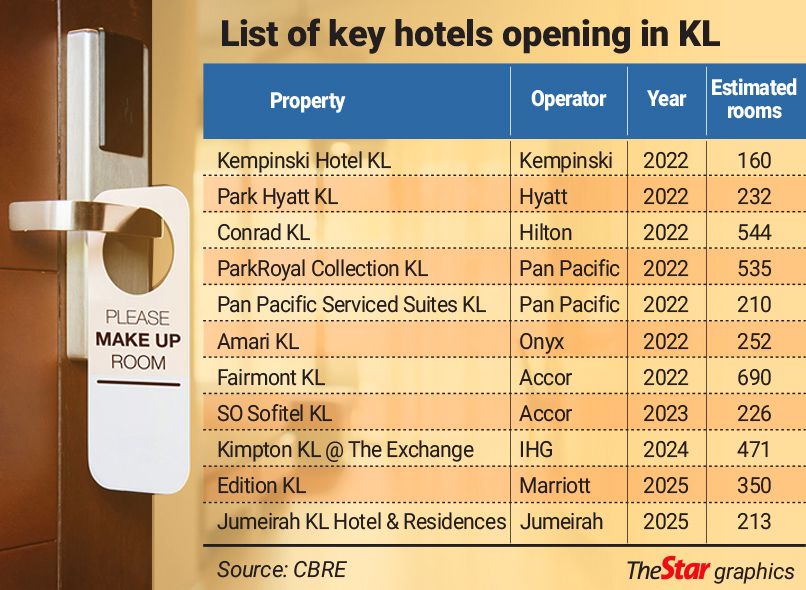 THE Malaysian hotel industry, which was one of the hardest hit sectors during the pandemic, looks set to finally begin its much-needed path to recovery.

However, he emphasises that it may take as long as a year for the hotel industry to return to pre-pandemic levels.

“To be more realistic, it will take up to a year for us to go back to our pre-pandemic days.

“We will have to wait, if we want to see occupancy rates go up to between 60% and 80% again,” he tells StarBizWeek.

In light of the recent Hari Raya festive season and allowance of interstate travel, Subramaniam says it was mostly the hotels outside of the Klang Valley that enjoyed high occupancy rates.

“The hotels within the Klang Valley were not as full because most people went back to their hometowns.”

He adds that most of the international tourists coming into Malaysia at the moment were mostly from regional countries.

“For now, we’re seeing mostly tourists from around the region such as Singapore and Thailand. Foreign travellers from Europe or other parts of the world have not returned in a big way yet.”

Additionally, Subramaniam says that there is currently a shortage of workers in the service industry.

“Many have moved on to other industries in the last two years as a result of the pandemic.

“Moreover, the increase in minimum wage to RM1,500 has also aggravated the situation. We understand that many hotels have applied for foreign workers, but they are yet to receive approvals from the authorities.”

CBRE|WTW chairman Foo Gee Jen, meanwhile, says the re-opening of international borders on April 1, 2020 will provide a positive outlook for the tourism sector and drive the tourism market to slowly regain its momentum.

“Earlier, there was an arrangement for a vaccinated travel lane (VTL) between Malaysia and Singapore, and then subsequently Thailand and Cambodia.

“Industry players are optimistic with the reopening of borders that come with an increased confidence level of tourism operators within the market.”

Citing the MAH, Foo says hotel occupancy is expected to reach 60% in the third quarter of this year, mainly contributed by international tourists.

“To support this arrangement, entry procedures have been eased in comparison to last year and this may increase the demand for tourism products.

“Business travelling as well as leisure expenses on resorts located in Langkawi and Melaka, among other getaway islands, will see a gradual rise in occupants as many have grown to worry less about the statistics of the Covid-19 numbers that was initially creating a mental block to the very idea of travelling.”

Rahim & Co in its Property Market Review 2021/2022 says the Malaysian hotel sector is expected to steadily improve in 2022, subject to continued management of the Covid-19 situation.

“As tourism was put to a stop for most parts of 2021, it was only in October when interstate travel was allowed fully that the hotels were able to re-open their doors for business.”

During the restricted travel period, Rahim & Co notes that a few hotels were operating as quarantine accommodation facilities to supplement their operations, while some others had to be permanently closed down.

“After interstate travel restrictions were lifted, hotels and resorts saw bookings soaring high, indicating the demand for domestic travel is still evident but is constrained by the pandemic-induced measures.”

Meanwhile, CBRE in its 2022 Kuala Lumpur (KL) Hotel Market Outlook and Prospects admits that the hotel industry in KL has had to navigate the challenges brought about by the pandemic.

“However, strong economic growth and the Malaysian government’s robust plan to reopen its borders to international travel and revitalise its tourism industry, coupled with improving fundamentals and notable infrastructure developments in the pipeline, make KL’s hotel market a prime candidate for investment in 2022 and beyond.”

According to CBRE, 2022 will see the opening of around seven key hotels comprising more than 2,600 rooms in Kuala Lumpur.

CBRE adds that at least four more key hotels are scheduled to open their doors between 2023 and 2025.

These will be the SO Sofitel KL, Kimpton [email protected] Exchange, Edition KL Marriott and Jumeirah KL Hotel & Residences.

These four hotels alone are estimated to add another 1,260 rooms into the Kuala Lumpur hotel market, says CBRE.

“Many key hotel openings have been delayed due to the disruption of the pandemic. A big portion of the hotel pipeline is targeting luxury and upper upscale demand,” it says.

“Over the next three years, luxury and upper upscale will account for over 60% of the total new supply.”

Additionally, CBRE notes that the return of Singapore travellers is expected to drive the Malaysian tourism market’s recovery in 2022.

“Total tourist arrivals in Malaysia reached 26.1 million in 2019, recording a 1% year-on-year increase. The top-five source markets for travellers to Malaysia in 2019 were Singapore, Indonesia, China, Thailand and Brunei.”

CBRE adds that South-East Asia remains the top contributor to Malaysia’s tourism, accounting for 66% of the total arrivals in 2019.

“Singapore has historically been the top source market for Malaysia, accounting for an average of 46% of total arrivals between 2015 and 2019.

“Despite a decrease in 2020, Singapore remained the top contributor with 1.5 million arrivals.”

CBRE says total arrivals dropped as a result of varying travel restrictions, coupled with the latest waves of Covid-19 across the region,

“Thailand emerged as the top source market in 2021, accounting for 54% of total arrivals in Malaysia. Between January and September, Malaysia welcomed about 4,000 arrivals from Thailand daily.

“The resumption of the VTL with Singapore, the historically top source market, is expected to have a strong positive impact on Malaysia and Kuala Lumpur’s economic and tourism market recovery in 2022.”

“According to the MasterCard-CrescentRating Global Muslim Travel Index (GMTI) 2021, international Muslim travellers grew at a compounded annual growth rate of 7.5% between 2013 and 2019.

CBRE notes that Malaysia topped the GMTI 2021 as the best Muslim-friendly holiday destination for Muslim travellers, followed by Turkey, Saudi Arabia and Indonesia.

“As a Muslim-majority nation, Malaysia offers an abundance of prayer facilities, halal food and a Muslim-friendly atmosphere.

“The Tourism, Arts and Culture Ministry has introduced several initiatives, including the Islamic Tourism Centre and Muslim-friendly Accommodation Recognition to demonstrate the country’s commitment and ability to capture this fast-growing and increasingly significant segment in the global market.”