If Derby County’s story has centred on despair and frustration with the financial situation throughout the season, a trip to Blackpool symbolised everything that has kept the fire burning. Discussion of takeovers and frustration of nine months under administration or relegation was briefly parked as 4,000 travelling fans enjoyed a Saturday at the football.

It is 11am, four hours before kick-off on a bank holiday weekend, and Derby supporters filter onto Blackpool Pier. Some fans had arranged to meet on the beach to capture the last away match of the season. Most had already made a beeline to the away pub of choice, The Manchester, with plans to make a weekend of their trip to the seaside.

A section of the group in The Manchester dressed as pirates, perhaps to symbolise a new and exciting voyage to the third tier, the first time Derby had dropped below the Championship since 1986. Or maybe it was to dress the part for the Coral Island Casino, which many had planned to visit in the evening. Others wore T-shirts and shorts, though they’d regret it later, as clouds swept the sky and temperatures dropped. Still, the weather would not ruin their last weekend in the Championship for at least a season. “I wanna stay here and drink all your beer,” a group of fans sang. 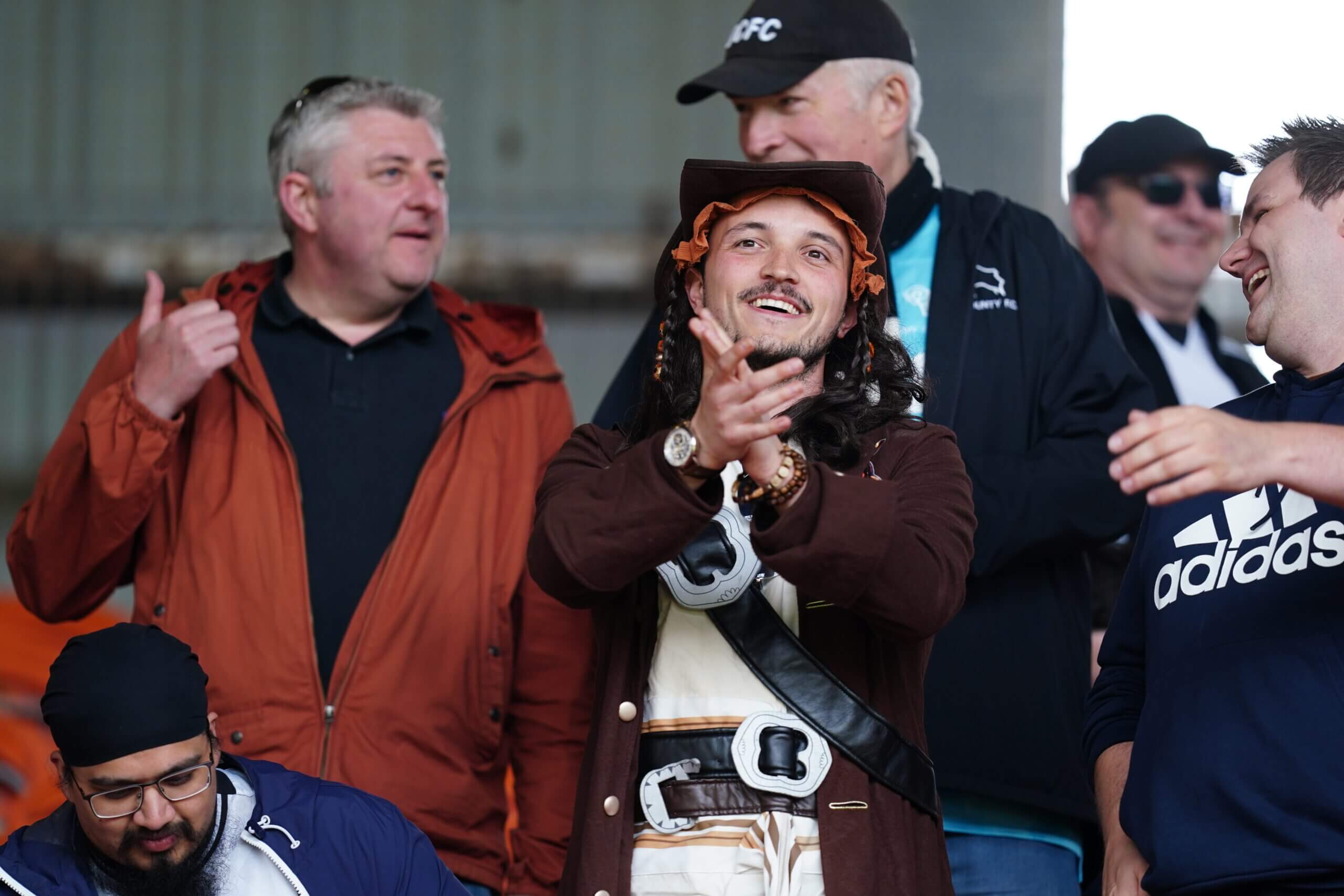 Fans in the stands before the game (Photo: Martin Rickett/PA Images via Getty Images)

As kick-off neared and hundreds of supporters became thousands, the thickened crowd of bodies became noticeably more diverse. While men and women regularly travel side by side as away supporters, young children accompanied their families on this occasion. It was a party atmosphere from start to finish, with the spirits raised by the performance on the pitch.

There is beauty in camaraderie, seeing the same people as the week before, and the month before that, and in some cases, decades prior. Football fans do it because it is what they know, and the thought of it being taken away is near unthinkable. Although, in recent months, Derby supporters might have struggled to keep the dark thoughts away.

Since Mel Morris put the club into administration in late September, Quantuma, the club’s administrators, have subjected supporters to a gruelling rollercoaster of emotions. But, with the announcement of US businessman Chris Kirchner as the preferred bidder in early April, the club could be heading towards a brighter future.

Kirchner took to Twitter to update supporters on his potential takeover last Wednesday, saying, “The EFL check is ongoing. Down to business plan now. Source and sufficiency have been proven, but sufficiency depends on the business plan and what funding the business shows it will need over time, so the two are intertwined.” He also added that the club had started preliminary talks with players and staff who the club want to retain for next season, although Rooney upped the urgency in his pre-match press conference, suggesting he needs to propose “numbers” to players in the coming week to fend off other suitors.

Fantastic away win today… 4,000 supporters strong got to see the future of Derby on display. Congrats to Cash and Malcolm on their first goals!! No major updates this weekend, but this week will see everything my team and I have been working hard on come together.

But the scars from the previous chairman have not faded, and although Derby fans can put on a brave face, they are worried for their club’s future after Morris’ financial misdealings culminated in a combined 21 points deducted for entering administration and breaching Profit and Sustainability regulations. Five clubs – Birmingham City, Sheffield Wednesday, Reading, Wigan and Derby – have been hit with points deductions in the Championship in as many years. Too many owners have put community institutions at risk under the EFL’s watch.

After the Derby supporters had sung their customary songs of praise about Rooney and the players, they directed their attention towards the Football League, singing “fuck the EFL”. Blackpool fans joined in with the chant in the memory of former chairman Karl Oyston – whose “illegitimate stripping” of over £26 million of the club’s assets to companies he owned put the club into financial jeopardy. Supporters of both clubs coalesced around the pain of seeing their club in peril as they did at Pride Park in December.

Derby won that match 1-0 and then beat West Bromwich Albion, which they followed with a 2-1 away victory over Stoke City. But, after winning at the bet365 Stadium, Derby lost nine consecutive away matches.

Rooney often complained that the results did not match Derby’s performances on the road, which were typically OK, but he could not find a cutting edge in the final third from his forwards. Against Blackpool, his players delivered, breaking their unwanted streak by being clinical. “I am delighted with the win, but we can play better than that,” Rooney said following the 2-0 victory. It’s a funny game, football, there have been much better performances away from home, and we have come out with nothing. Today, we didn’t play as well as we can, but we dug in when we had to.”

And the supporters have two new heroes to thank, Malcolm Ebiowei and Eiran Cashin, who scored their first goals for the club. The academy graduates made the step up to the first team in February and have been regulars since. 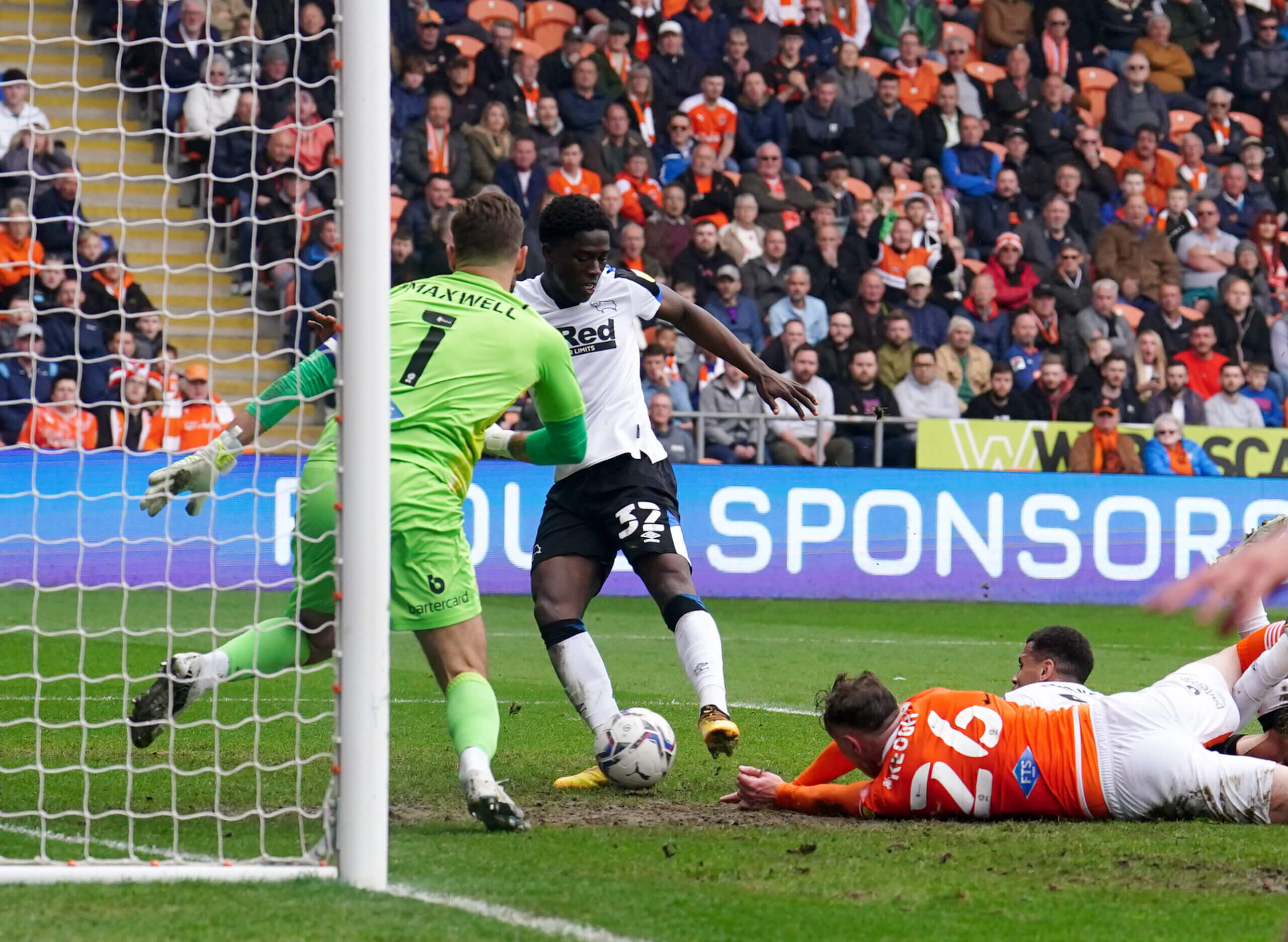 “Ebiowei has deserved a goal, and I’m delighted for him. It is a positive for us getting him off the mark,” Rooney added. “It is a shame there is only one game left, but I am sure there will be a lot more in his career. Cashin has also deserved a goal for his performances.”

Alongside 12 other first-team regulars, including Kelle Roos, who saved Gary Madine’s first-half penalty, Ebiowei and Cashin are out of contract at the end of the season. For the club to achieve immediate promotion from League One, securing their futures is an immediate priority. At the final whistle, fans expressed their appreciation to Festy Ebosele, who is joining Serie A side Udinese at the end of the season, but they do not want to lose more of their academy graduates without seeing them flourish.

But, if Kirchner’s takeover is not completed and the current players are not signed to new deals, Rooney’s future is in doubt and Championship away days on the coast could take much longer than a season to return.

The Ultimate Guide to Yoho National Park in Canada